Comments: Capt. Patrick Kelly of Capt. Smiley Fishing Charters and Capt. Chris Ossman of Fine Catch Fishing Charters worked the Little River vicinity Monday and found a good showing of red drum. “We fished two spots and there were fish at both spots,” said Kelly. “We could see the reds pushing in shallow water.” The duo caught a dozen reds, most in the 17-18 inch range with a few over slot fish up to 30 inches using live mud minnows and cut shrimp. “It looks like the reds are pretty plentiful in Little River,” said Kelly, who noted a water temperature in the upper 40s. Capt. Mike McDonald of Gul-R-Boy Guide Service in Georgetown used a variety of soft plastic grubs to catch 11 spotted seatrout and a few flounder on a Monday charter trip. McDonald said the flounder measured 17 and 14 inches and reported a water temperature in the 52-55 degree range. Capt. Dan Connolly of O-Fish-Al Expeditions also fished Winyah Bay early in the week and wound up with about 20 red drum and several black drum, caught on dead shrimp. Connolly hit spots in the bay and the jetties, with all the black drum caught at the jetties. Connolly noted a water temperature in the upper 40s.

Comments: Dr. Jason Rosenberg’s Painkiller crew headed out for a Wednesday sheepshead excursion from Murrells Inlet, with Rosenberg, Capt. Jay Sconyers, Jimmy Kaminski and first-time angler Keeland Williams aboard. They headed south to a near-shore artificial reef and dropped down fiddler crabs. The crew wound up with 10 sheepshead over the 14-inch minimum size limit and four black drum within the 14-27 inch slot limit. “You’ve got to anchor right over the structure — it’s vertical fishing,” said Rosenberg. “If you’re five feet (off the spot) you won’t catch any fish. We used live fiddlers and the fish were plentiful.” Rosenberg noted a water temperature of 57 degrees. Action is slow on the Grand Strand piers that are open, with just a few whiting and croaker, and perhaps the occasional small black drum, being caught. The ocean water temperature was 55 degrees at 1:30 p.m. Thursday afternoon at Apache Pier.

Comments: Connolly joined local angler Greg McKelvey on his 24-foot Cobia for a quick run offshore on Monday for a combo trolling-bottom fishing trip. They trolled a ledge in depths of 150-300 feet with a water temperature of 76 degrees, with ballyhoo on Ilander skirts producing a 20-25 pound king mackerel and a good wahoo bite although the fish was lost at the boat. The tried and true cedar plug produced three nice blackfin tuna. They switched to bottom fishing, and found the best action for black sea bass, triggerfish and vermilion snapper in depths of 80-100 feet with a water temperature of 70-72 degrees. Connolly said sharks were pesky in depths of over 100 feet. Other reef species available include amberjack, grouper, porgy, grunts and red snapper. The annual shallow-water grouper spawning season closure continues through the month of April and includes gag grouper, black grouper, red grouper, scamp, red hind, rock hind, yellowmouth grouper, yellowfin grouper, graysby, and coney. Also, red snapper are common on the ledges and live-bottom areas but the species is closed to harvest in the South Atlantic Region and must be released.

Comments: “They’re pond fishing, and that’s about it,” said Ronald “Catfish” Stalvey of Stalvey’s Bait and Tackle in Conway. Flooding continues on the Waccamaw River and the Intracoastal Waterway. The Waccamaw at Conway was at 12.08 feet at 1:15 p.m. Thursday, and finally forecast to slowly fall out of Moderate Flood Stage over the next few days. The Little Pee Dee at Galivants Ferry and the Pee Dee at Pee Dee (between Marion and Florence) were both at Minor Flood Stage Thursday afternoon. Anglers and other boaters are best advised to stay off the rivers until the flood waters recede. Any boaters who must be on the rivers or the ICW should beware of floating debris and navigate at idle speed, especially around residences and structures that are undergoing flooding. Wakes can easily cause further, unnecessary damage to the properties. 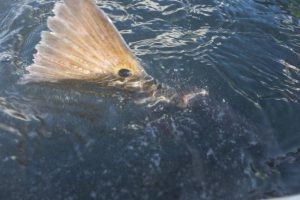