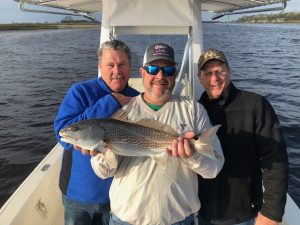 Comments: Capt. Patrick Kelly of Captain Smiley Fishing Charters dodged the raindrops in the Little River area to head out on the water Monday through Wednesday and found good action from red drum, with black drum mixed in. Kelly worked shallow areas at low and rising tide to find the fish. “As (the tide) rises we go farther in the creeks, and finding schools of reds,” said Kelly. Kelly used live finger mullet for the reds and also has caught reds along with black drum on docks using fresh cut shrimp. The captain tried briefly to catch spotted seatrout with no success. “If you took the time to trout fish you could probably find them,” Kelly said. Kelly noted a water temperature of 54-55 degrees, up from the upper 40s he observed a week earlier, and observed murky water thanks to plenty of rain. “The visibility is not that good, it’s usually clearer this time of year,” said Kelly. “Places that normally are clear around Little River are darker than normal.” Snot grass, the aggravating algae, is prevalent in some creeks in the Little River area, along with other estuaries. Capt. Mike McDonald of Gul-R-Boy Guide Service in Georgetown headed south last weekend on a charter trip and landed 15 reds, or spottails, and 10 small sheepshead. McDonald, who used cut shrimp for bait, noted the red drum measured in the middle of the 15-23 inch slot.

Comments: Capt. Jeff Maples of Reel Salty Charters in Murrells Inlet hit the near-shore reefs on Monday and had a super time with black drum, along with a few sheepshead. “I got a whole bunch of fiddler crabs I’ve been keeping alive and that’s the only thing I used,” said Maples. The crew wound up with 19 black drum measuring from over 14 inches to 18 inches along with two sheepshead and several spottail pinfish, known as ringtails. “The reefs are doing really well when you can get out to them,” said Maples, who noted a water temperature of 54-55 degrees. Action remains slow on Grand Strand piers with a few whiting and croaker being caught, although angler activity is slow. The ocean water temperature was 55 degrees at 4:15 p.m. Thursday afternoon at Apache Pier, the same as a week earlier.

Comments: It’s been a generally nasty week, and a cold front is blowing up the seas this weekend. When conditions allow, trolling has been producing wahoo and blackfin tuna, with some king mackerel mixed in. Bottom fishing is producing good catches of black bass, with larger fish being found in depths of 50 to 90 feet. From 80-120 feet look for vermilion snapper, triggerfish, porgy, amberjack, grouper, red snapper and grunts along with black sea bass. A couple of significant closures affecting reef fishing are in effect. The annual shallow-water grouper spawning season closure continues through April and includes gag grouper, black grouper, red grouper, scamp, red hind, rock hind, yellowmouth grouper, yellowfin grouper, graysby, and coney. Also, red snapper are common on the ledges and live-bottom areas but the species is closed to harvest in the South Atlantic Region and must be released.

Comments: Another deluge of rain has moved through the eastern Carolinas, which can’t be good news for local rivers. The Waccamaw at Conway was at 11.05 feet at 4:15 p.m. Thursday, and forecast to remain steady in Minor Flood Stage. The Little Pee Dee at Galivants Ferry was just below Minor Flood Stage Thursday afternoon. While river levels are a little better than a week ago, conditions remain tricky on the rivers. Boaters should beware of floating debris and navigate at idle speed, especially around residences and structures that have had flooding issues. Wakes can easily cause further, unnecessary damage to the properties.