‘We want to be proactive’: Grand Strand fishing event canceled amid flounder downtrend

The Grand Strand Saltwater Anglers Association has staged a springtime flounder tournament that has grown in popularity for nearly 20 years, but there will be a one-year hiatus in the event that has attracted local as well as out-of-state anglers each April to Murrells Inlet.

The fishing club has announced the 19th annual tournament will not be held in 2020 in response to regional and statewide studies that indicate the flounder population in the Southeast in general and South Carolina specifically is in a serious downtrend.

A comprehensive regional study concluded in 2019 that numbers of southern flounder along the four-state Southeast coast including North Carolina, South Carolina, Georgia and Florida are at historically low levels.

On the state level, biologists with the South Carolina Department of Natural Resources stated that flounder numbers in the state are at the lowest since the agency began keeping records.

Sometime this year, a management plan for flounder will be crafted and eventually presented to the S.C. Legislature during the 2021 legislative session.

“The handwriting is on the wall,” said Ed Skowysz, spokesman and board member of the Grand Strand Saltwater Anglers Association (GSSAA). “When the legislature decides what to do, I’ve got a feeling (the changes are) going to be stringent. We’re trying to get out ahead of it. Part of our charter is to conserve the fisheries. We want to be proactive.”

In a statement, Skowysz said “at the present time we believe it is for the best interest of our organization to be a leader in the conservation effort of our flounder fishery and postpone our tournament for at least one year.”

The event has weighed in flounder for cash prizes over the years, essentially a “kill” tournament, but there could be a big change in store when the tournament resumes on April 24, 2021.

“For next April, I think I can convince the board we’ll do the tournament and it should be catch-and-release,” said Skowysz. “We want to do it first class. We want to make sure the fish survive.”

The tournament annually attracts numerous anglers – 183 competed in the 2018 event – and it will certainly be missed this spring.

“People come from out of town, they want to know when the flounder tournament is, I’m talking people from out of state,” said Skowysz. “They enjoy this tournament so much.”

While canceling the tournament may create a small respite in the fishing pressure on flounder this spring, also missing will be the funds raised that the club donates to very worthy causes. The flounder tournament is the club’s main fund-raising event.

Over the years the GSSAA has contributed approximately $8,000 to the S.C. DNR Artificial Reef Program along with frequent contributions to a Coastal Carolina University scholarship fund earmarked for Marine Science majors and the Student Angler League Tournament Trail (SALTT).

The club is considering staging a different tournament, targeting a species or species other than flounder, later in the year.

“We may consider doing some type of tournament,” said Skowysz. “That might allow us to keep going for a year as far as donations go.” 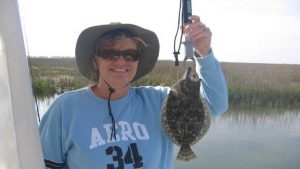