Comments: Boat ramps are closed to use by the general public, but there is still fishing activity on local estuaries. Capt. Patrick Kelly of Captain Smiley Fishing Charters and Capt. Chris Ossman of Fine Catch Charters worked the Little River area Monday and had success with spotted seatrout, red drum and black drum. The duo cast-netted shrimp in deep holes in the ICW for bait. “We caught enough (live shrimp) to fish with,” said Kelly. “That definitely increases your shot at trout. It’s like a night and day switch with trout if you’ve got live shrimp.” Overall, Kelly says action is good for late March-early April. “It seems like trout are pretty plentiful, certain areas are holding bigger trout, but we’re seeing a lot of smaller fish,” said Kelly. “We’ve seen some nice reds, some in the slot, and there are a lot of small black drum around right now.” Capt. Mike McDonald of Gul-R-Boy Guide Service continues to fish south of Georgetown for better water quality and has landed trout and red drum on his last two trips. On Monday, McDonald’s crew caught five red drum and eight trout on a mix of soft plastic grubs and cut shrimp. McDonald noted a water temperature of 74 degrees on the ICW Monday. Capt. Jason Burton of Murrells Inlet Fishing Charters  says the spring flounder bite is picking up. “We’re catching a good amount of flounder (and) the majority of them are short (of the 15-inch minimum size),” said Burton. “We’re still catching a few speckled trout here and there but that bite seems to be slowing down.”

Comments: During a rapid water temperature rise that ended early this week, both Spanish and king mackerel showed up in the near-shore waters. Burton reported that on Monday Capt. Justin Scott Witten of Ambush Charters and Murrells Inlet Fishing Center landed a king mackerel at Paradise Reef (3 miles east of Murrells Inlet) and two MIFC captains, Quentin Robert Faulkner and Nick Wofford, caught Spanish mackerel. “Justin was trolling spoons at (Paradise Reef) when they caught their king,” said Burton. “The Spanish were between three and five miles out and everybody was trolling No. 1 planers with Christmas tree rigs or single Clark spoons.” Burton also noted numerous bonito have been caught this week. The near-shore reefs are producing weakfish, black sea bass and possibly flounder, sheepshead and black drum. Manager Steve Gann of Cherry Grove Pier says action is picking up on the pier although there haven’t been many anglers. “They’ve been catching lots of whiting, and they’re getting a little bigger,” said Gann. “We were catching blues before the wind picked up and muddied everything up.” Gann said Northern hake have also been landed and mullet are moving in the surf. Gann noted the water temperature was up to 63 degrees but had cooled back to 61 by midday Wednesday.

Comments: Wahoo and blackfin tuna are the main species available for trolling boats in the offshore waters, but dolphin will be added to the mix in the next 2-3 weeks. King  mackerel are available, and are moving further inshore as the water temperature continues to rise. Bonito are numerous. Bottom fishing is very good with a variety of species being caught including of black sea bass, vermilion snapper, grey triggerfish, red porgy, white grunts, amberjack, grouper and red snapper. Red snapper must be released indefinitely in the South Atlantic region and the annual shallow-water grouper spawning season closure continues through the month of April, including gag grouper, black grouper, red grouper, scamp, red hind, rock hind, yellowmouth grouper, yellowfin grouper, graysby, and coney.

Comments: The shutting down of the boat ramps to public use has had a major impact on river fishing. “Ninety percent of my business is (from) people who use the ramps,” said Ronald “Catfish” Stalvey of Stalvey’s Bait and Tackle in Conway. “Now’s the prime time, the fish are biting and spawning, the weather’s nice and nobody can go. Fishing is good for the ones that can put in at private places.” For anglers that can get out on the rivers, Stalvey said “catfishing has been the best I’ve seen in a long time.” Fresh cut eel and shad are top baits for catfish. Also look for bream hitting crickets in 2-6 feet of water. Bass are getting into spawning mode and are hitting Texas-style rigged worms and craw baits. 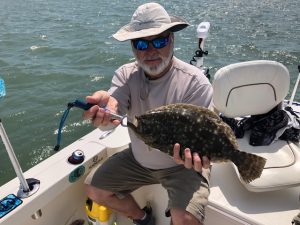