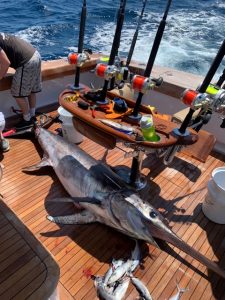 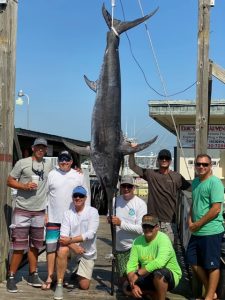 It was early May, and Blue Sky was trolling the offshore waters out of Georgetown in their normal fashion, in search of billfish, complete with teasers in their trolling setup.

Blue Sky Capt. Jay Weaver, also of Pawleys Island, was working an area “way offshore of the Southwest Banks,” south of the Georgetown Hole about 60-65 miles out of Georgetown.

“The (Gulf) Stream was pushed in over (the area) and there was a pocket of (pretty) water inshore of it,” recalled Weaver. “It was blue, there were flying fish everywhere.”

Weaver was trolling that area of pretty water and, after missing a small dolphin, he spotted a billfish.

“I called a blue (marlin) on the left teaser,” recalled Weaver. “I kept getting a glimpse of bill and fin. I though this might be a nice one. It went from the left teaser, ate right teaser, disappeared and piled on the right long line.”

Charles “Pookie” Ragsdale was near the right long line, fed the fish some line and hooked it up.

The battle was on, and Ragsdale was on the rod with an obviously feisty fish.

The fish was on standup tackle, a Shimano Calica TLD-25, and other members of the crew shared the angling duties.

“It was a very small rod, I’ve never seen that kind of pressure on a rod and reel that small,” said Weaver. “We went through all the anglers on the boat, and we could not budge the fish at all.”

Weaver said the fish finder started marking sharks around the fish, and then the fight changed.

“We felt the tap, tap when (the fish) got bit a few times, but it still didn’t come to the surface for another full hour,” said Weaver.

Finally, about 3 ½ hours into the fight, the fish surfaced in front of the boat

“It came up off the bow, we saw what it was, and drove right to it,” said Weaver. “It was not what we expected, but we were pretty excited.”

What the Blue Sky crew saw wasn’t a marlin at all, but a swordfish, a broadbill in the billfish family and quite a different species than a blue marlin.

Swordfish are typically found in very deep water and are rarely seen, much less caught, at the surface in South Atlantic waters.

“It’s kind of a once in a lifetime deal, we felt,” said Weaver. “They will come up to the surface and sun, but I’ve never heard of one feeding at the surface that late in the day. It was 9:05 a.m. when we hooked it. Generally you’re going to put your bait 1,200 feet down (if fishing for swordfish) in daytime hours. You need to be real, real deep with your bait.”

It was a rare encounter, indeed.

“In our whole industry, there have been three on the East Coast that have been caught regular trolling like that in the last decade,” said Weaver.

A few factors in the battle with the swordfish made the catch all the more amazing, including the presence of the sharks which chomped off an estimated 10 pounds of meat. Still the fish weighed in at 293 pounds at Georgetown Landing Marina.

The swordfish ate a ballyhoo with a chugger head, and the rig had only an 80-pound fluorocarbon leader.

“It was hooked dead in the corner of the mouth,” said Weaver. “The bill is sharp, way sharper than a marlin. The line was wrapped around its mouth, the upper and lower jaw. That cut down on the pressure on the hook, and was one of the things that kept us from straightening out the hook and made the fish not fight as long. The mouth was wrapped shut and in the only place it could have wrapped without breaking the line.”

Weaver said the meat on the swordfish was the pumpkin-colored variety, likely caused by the fish eating deep-water Royal Red shrimp.

“It looked like a Virginia ham,” said Weaver. “It was delicious.”

*Tuna Surprise: Weaver, like many other fishermen along the South Carolina coast, has been happy to see the return of yellowfin tuna this spring on his offshore trolling excursions.

A long-time captain, Weaver remembers the days when yellowfin were a relatively common catch in the vicinity of offshore bottom features like the Georgetown Hole and Winyah Scarp. They have rarely been caught or seen for numerous years in waters off the Palmetto State.

“It’s been a solid 15 seasons without them,” said Weaver . ”The last year they were here in numbers was 2005. After that very few yellowfin have been caught. It’s nice to see them back now.”

Weaver is hopeful their appearance is a trend and not an anomaly.

“Hopefully we see them again next year but there’s no guarantee,” Weaver said.