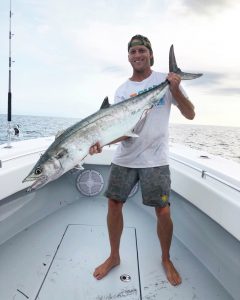 submitted photo
Trask Cunningham of Myrtle Beach is partnering with Marc Pincus of Hilton
Head Island to establish the Kingfish Elimination Series, which will feature
a unique format among king mackerel tournaments.

Between the Southern Kingfish Association (SKA), the Kingfish Cup and the Palmetto Kingfish Tour, there are plenty of king mackerel tournament fishing opportunities in the Southeast, and nowhere is the sport more popular than along the Carolina coast.

Trask Cunningham and Marc Pincus are introducing another series that promises to have quite a different format.

The format of the new series founded by Cunningham, an avid angler from Myrtle Beach, and Pincus, founder of the South Carolina Wahoo Series, brings to mind college basketball’s March Madness. Get ready for kingfish madness.

The Kingfish Elimination Series will feature a bracket-style, single-elimination format, with fishing teams competing head-to-head in order to advance. Survive and advance to the next round – the Sweet 16, Elite Eight, Final Four and championship.

“It should be exciting and fun,” said Pincus. “It’s going to be fun to see who is fishing against who and who you’re matched up against. It’s never been done before.”

The series is in its infant stages, and the way the different divisions are staged will vary in 2020.

The competition in the two North Carolina divisions will be embedded into existing tournaments, with each tournament representing a different round in the bracket.

“Those divisions are piggybacking on these existing tournaments,” said Cunningham.

For instance, the South Division will feature 32 teams in the bracket with the first round held in conjunction with the Jolly Mon King Classic out of Ocean Isle Fishing Center. The Sweet 16 will be paired with the East Coast Got ‘Em On King Classic, the Elite Eight with the U.S. Open King Mackerel Tournament, the Final Four with the Rumble in the Jungle and the championship with the Fall Brawl.

The Carolina Division (South Carolina) is already self-sustaining, and is the model Cunningham and Pincus envision for the other divisions in years to come.

Fishing dates are set for each round in the Carolina Division bracket, starting with the first round which enables competing teams to pick one fishing day from June 9-14 to weigh in one king.

The winners advance to the Sweet 16, with that round set for July 21-26 and the teams again able to pick one fishing day out of those six days. The Elite Eight is set Aug. 8-13, the Final Four will be staged with the Marlin Quay King Mackerel Tournament on Sept. 11 and the two teams in the division championship will square off on the fishing day of their choosing in the South Carolina Fall Classic Sept. 21-Nov. 7.

“The format we’ve got this year for South Carolina is what I’m shooting for in the future in all the divisions,” said Cunningham. “Next year our goal is to do a 64-team bracket, have four 64-team brackets.”

King mackerel tournaments are mainly held during the spring in Florida and those tournaments have been canceled due to fallout from the coronavirus, thus there will be no South Florida Division this year.

In future years Cunningham and Pincus hope to determine an overall winner, with a final Final Four between the winners of each division.

“We’re not going to have an overall winner this year,” said Cunningham. “We’re getting it off the ground this year and see where it goes. We can build off this, it has a lot of potential.”

The Carolina Division and South Division already have their brackets set, and the blind drawings got a lot of clicks as they were held live online. Next year the drawings will be held live in front of what are sure to be raucous crowds during the Captains Meeting for each division.

*Sword Surprise: The crew of Blue Sky out of Georgetown Landing were surprised at the billfish they encountered Wednesday on an offshore trolling trip.

Capt. Jay Weaver and crew thought they were in a lengthy battle with a blue marlin but wound up boating a 293-pound swordfish.

Look for more details in next week’s column.