South Carolina saltwater anglers will have a few more fishing regulations to adhere to starting this spring.

The South Carolina Legislature has approved a pair of bills affecting Atlantic spadefish and tripletail, with both only awaiting ratification by Gov. Henry McMaster.

Bill S-274 puts a first-time minimum size limit on spadefish of 14 inches. The daily bag limit remains the same for spadefish, which are regulated under the snapper grouper complex which allows an aggregate daily bag limit of 20 fish per person for a number of species.

Spadefish inhabit near-shore structure, natural and artificial, in the Atlantic Ocean during warm weather months, from approximately May through October. Catching spadefish using cannonball jellyfish for bait is a favorite past time in waters off the Palmetto State coast from late spring through autumn.

Capt. Jeff Maples of Reel Salty Fishing Charters in Murrells Inlet targets spadefish, especially in May and June, and has no issue with the new minimum size limit.

“I can understand it,” said Maples. “There’s not a lot of meat on them until they get that big anyway.”

South Carolina is the final state in the tripletail’s range to put bag and size limits on the species.

In South Carolina waters, tripletail are an intriguing fish typically found in warm weather around fixed or floating structure anywhere from estuaries such as Winyah Bay to sargassum weed lines offshore. They are often seen floating on their side near the surface, and readily eat crustaceans, especially live shrimp.

There are some anglers, including guides, who target tripletail in local estuaries, particularly the larger estuaries from Winyah Bay and points farther south. In the ocean, tripletail are most often found around free-floating objects including storm debris.

Tripletail are an incidental catch for Maples, who predominantly fishes in the Atlantic Ocean. He doesn’t anticipate catching many keepers with the new 18-inch minimum size limit.

Both bills were introduced during the 2019 session and received support of Coastal Conservation Association South Carolina (CCA SC). They passed both the House and Senate in overwhelming fashion.

“We (CCA SC) have long held the position that every recreationally-important species should be seen as having value and should be protected with reasonable management regulations,” said Tombo Milliken, CCA SC Government Relations chairman. “To do otherwise would be irresponsible given the increasing pressures on our existing coastal resources. We are very appreciative and thankful that we have willing partners in the General Assembly and state agencies to work with towards those goals.”

The first event of the year for the Student Angler League Tournament Trail (SALTT) was held Feb. 8 at the Carroll Campbell Marine Complex in Georgetown.

Recent rains and a cold front provided murky and chilly conditions for the young anglers on the rivers and the Winyah Bay vicinity as they targeted either red drum or bass.

The event was the fourth of six in the SALTT series for the 2019-20 school year. 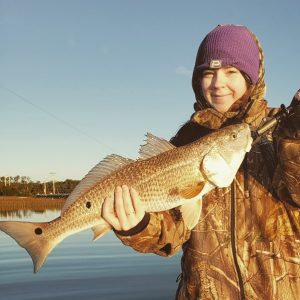